Visiting Santa Claus Village in Rovaniemi by train was, as I presumed, again an interesting experience arousing many creative thoughts in the dark capital of the Magical Lapland. You know the sun does shine only a few hours there, but I got bright ideas there.

Lapland felt a state of mind.

It was already the 5th year in a row I paid a visit to the Country of Christmas, that means to Santa Claus Village in Rovaniemi, Lapland with a camera and a phone. And a curious mind. Only this time I would also go and check how the elves are working in the Cavern of Santa, Santa Park.

Finnish trains are nearly always reliable, that means, they come on time, people are friendly even if they hardly speak to you, it is a safe way of traveling when it is cold, dark and slippery on the highways everywhere in the Northern Finland

Even if reindeer might even fly, my red car would not fly so it is also be a good choice for traveling, but the roads might be slippery even salted. Reindeer even lick salt from the road surface.

This time I saw reindeer in Muurola from the train window. Magical!

The bus driver told that it has come more possibilities for some other bus companies to drive tourists from the railway station of Rovaniemi to Santa Park and Santa Claus Village.

Some taxi drivers from Oulu come also to Rovaniemi on the high Christmas season.

Some icons of Rovaniemi

There are icons of Rovaniemi like the bus station, the post office, the candle bridge, hotel Pohjanhovi, architecture of famous Alvar Aalto (the reindeer city plan and Lappia house), Santa Park, Santa Claus Village and even the darkness of the Capital of Lapland.

What has changed most is the business around Christmas in Rovaniemi?

You see more Christmas trees with bright lights and snow on them and some new buildings. Muumin statue of snow is maybe not so original Lappish style, but very Finnish. The Moomin characters combine the Finnish philosophy with freedom and fairytales.

A lot of young tourists from China hang around the city looking for photoshooting nice places. Young, smart and curious people coloring the landscape in their Canadian Goose jackets, Burberry scarfs of other exclusive outfits.

Forwardness in the Lappish lifestyle

The feeling you are nearing to Santa Claus Village is again very exciting and I see right away some changes which have happened in Rovaniemi since the last year. More red buildings, more colorful lights, more magic!

Lightnings on the trees are just so beautiful and eco-friendly!

What if there would be some guiding for a visitor just in the front of the bus stops!

The whole Santa Claus Village has become a more and more business like area of Lapland which is a good thing since it gives the local people more possibilities to live.

The locals also have to get to know the tourism which brings some issues people do not recognize easily. The university of Lapland seem to bring the scientific view to the ecological tourism in Rovaniemi.

Feelings of a Finn

Even we Finns feel a confused in our own country especially in Rovaniemi where there are so many languages spoken.

Mrs. Santa Claus has a warm heart and she welcomes all nice people to Finland. Also the naughty lists are empty as far I have seen the collections of letters the elves bring to Santa.

There seems to be also businesses partly of foreign origin which makes the atmosphere very interesting, forward-looking. It even helps Rovaniemi to develop their international services.

I am longing a bit for the tiny start of Joulumaa, the Christmas Country and congratulate Rovaniemi for long-lasting efforts in the tourism business.

There were some foreseeing people who believed in Santa Claus from the start like Niilo Tarvajärvi. I have seen how long a journey the locals have done from the 1976´s!

Children from different countries play in red and black overalls.

Children are happy gliding down the hills, playing with the snow and on the safe playground made for them!

Parents or special guides take such a good care of the children. I happened to listen to a Brittish lady telling a little boy of nine how to behave nicely. It was such a wise talk!

Then to reindeer! They are just amazing animals of the North. I love them when I get good photos and video of a reindeer trip of 400 meters. There are beautifully lighted steps with nice lamps to shoot photos from the high bridge.

What a secret to be revealed!

There you see an interesting log building of Mrs. Santa Claus which is supposed to be opened in February as it was printed in a nice, new map of the area.

I love that house already, since some of the builders used to work in Lappajärvi. That is a very dear place!

Actually this piece of news should have been a secret, but since it now has been printed on the map, it no longer is a secret. Also the elves told about that for some time ago!

One Mrs. Santa Claus teaches handicrafts and hornwork in a village called Saarenkylä. That is amazing! You may even count how many we really are!

Finally Mrs. Santa Claus Finland has a real but secret, old, red house on the Island of Stories, Hailuoto. In a very icy and cold landscape in the Bothnian Sea. That old house is open only for special visitors.

A visit to Hailuoto, to Mrs. Santa Claus, is also very exotic since you take a ferry or ice road there from the fish harbor. Just thirty kilometers from the airport of  Oulu. For sure you hardly see any tourists there!

You really might enjoy the quietness of the nature in Hailuoto.

Back to Rovaniemi and on the visit to the famous city of Christmas!

Bus drives in a special route first from the railway station of Rovaniemi to Santa Park, then to Santa Claus Village, but there is no bus straight from Santa Park to the city. It does not matter so much but it is good to know.

People, tourists or service personal in Santa Claus Village are very international and you can see how they have been brought-up and what kind of manners they have.

As a professional teaching Mrs. Santa Claus it always makes me happy to meet well-behaving children and elves, reindeer or snowmen!

I have to credit a young, probably Spanish, man in the Info at Santa Claus, where I asked how long it is to Santa Park. He told me that it is only 1,5 kilometrs there.

Rye bread in the bag on the way to Santa Park

Only about two kilometers walk from Santa Claus Village to Santa Park.

Luckily I had some rye bread in my bag (as the Finns often do), so I ate it while walking actually two kilometers´ way to Santa Park in a nice, wintry and beautiful landscape among the snowy trees in the Finnish forest. Not very far! Credits to a Spanish student worker who encouraged me to walk on the beautiful forest road.

Walking with “sisu” like the Finns do regardless of the temperature or snow situation. 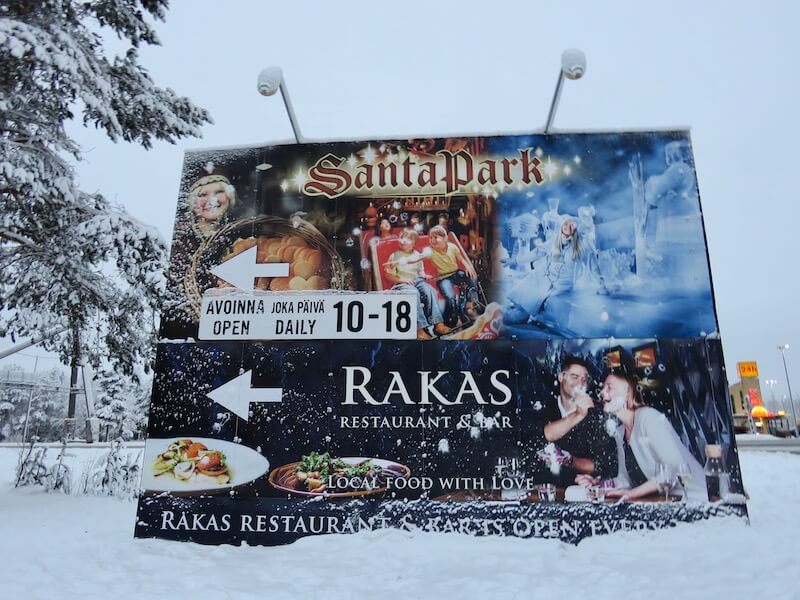 What nice things do you want to make you or your friend happy? Maybe Christmas spirit, gifts, new ideas of learning. Ask us at Mrs. Santa Claus Finland and we draw it specially for you!

If you are searching for a magic Finnish Christmas, you have come to the right place! It is Mrs. Santa Claus Finland with her elves who will lead your imagination to the Finnish Winter Wonderland of Hailuoto Island.